If you’re not familiar, distri is a Linux distribution to research fast package management.

You can read more about distri starting in my introduction blog post, then in my series of blog posts about distri.

Changes since the last release

If you’re curious, you can also browse the commits since the last release.

Building a distri disk image (using e.g. make image or distri pack directly) is now significantly faster, because the most time-consuming step has been replaced: initrds are no longer built with dracut, but with minitrd, a custom from-scratch implementation optimized for speed.

Whereas it previously took ≈40 seconds, a full distri disk image can now be generated in 4 seconds (with warm caches)! 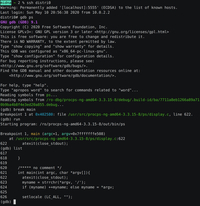 Caveat: 15 packages contain at least one generated source code file which is unavailable, to be fixed at a later date.

The DWARF debug symbols of all packages are available through /ro-dbg, e.g. /ro-dbg/emacs-amd64-26.3-15/debug/.build-id/d8/149e8d4e11dc451ac5e718dfc44344c610e23e.debug. While the backing debugfs service was already included in the previous release, its reliability has been improved: distri fuse -autodownload now keeps retrying when started without network connectivity. 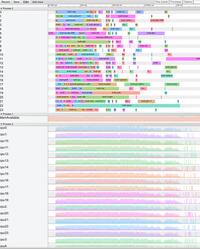 Improving the package build performance results in faster batch builds, and a better interactive development experience when iterating on a single package.

We now use the txtpbfmt Go package (and program) to enforce consistent formatting of build.textproto files across the repository.

Furthermore, txtpbfmt allows for programmatic modification of build.textproto files. The distri scaffold subcommand uses txtpbfmt to only update the upstream url, hash and version fields when the package build.textproto file already exists. In particular, this means that manual additions (including comments!) are preserved.

To make upgrading packages to more recent upstream versions even more convenient, the distri scaffold subcommand now has a -pull flag which will heuristically (see repobrowser for more details) pull in a new upstream version:

The distri repo browser is now available at https://browse.distr1.org!

Similar to https://godoc.org/, the distri repo browser can visualize the contents of any distri repository. The public instance at https://browse.distr1.org is restricted to repositories hosted on https://repo.distr1.org for the time being.

The repo browser displays not only the current versions of all packages in the repository, but also flags packages as out of date in case a more recent upstream version is known.

34 packages (6.2%) are currently not categorized because the upstream check failed.

For some packages, this is expected: for example autoconf2.13 is technically out of date (autoconf 2.69 is current), but mozjs specifically requires the older 2.13, so we will need to keep that outdated package around.

In other cases, upstream is unreachable. Either temporarily (server issues, like recently with freedesktop.org) or permanently, e.g. giblib, where the upstream URL results in a connection refused error for years.

Sometimes the heuristic results in a false-positive result: the package is shown as up-to-date, but a new major version is available in a different subdirectory. Some projects (e.g. util-linux) publish release within a major version in their own subdirectory, e.g. https://mirrors.edge.kernel.org/pub/linux/utils/util-linux/v2.32/util-linux-2.32.1.tar.xz.

The heuristic should be changed to detect that situation, which is tracked in issue #68.

Tab completion for package installation is now available by default:

Press the tab key after entering distri install and you will be presented with a list of available packages.

This is powered by distri list, which fetches the repository metadata on demand.

Side note: the default shell for the root account was switched from bash to zsh for this, which also enables history by default.

A few new packages have been added, typically because I needed them on my test machine:

A number of packages has been updated to their current upstream versions:

More work went into the autobuilder, but it is not deployed yet.

The autobuilder should eventually build every git commit, so that we have quick, automated feedback regarding possible breakages, and an easy way to test the current version of distri, whether released or not.

Due to the large data volume (dozens of gigabytes per commit) and operational challenges (building a single commit from scratch takes ≈2 hours on an Intel Core i9-9900K), this setup requires careful tweaking.

To set expectations: due to its experimental nature, distri does not make any guarantees that updates will work. We try to make them work, as long as you follow the update instructions described here. Good luck! :)

The jackherer disk image is 7 GB in size, which is not sufficient to hold the default installation in both versions (temporarily). Double the image in size on the host:

…and enlarge the file systems within the image:

Consider switching from dracut to minitrd

To switch from dracut to minitrd, use:

This will be effective upon the next installation of the linux package, including the one in the distri update step below.

Workaround: Update the distri1 package, which contains the distri(1) command, before any others:

This is required for the next command to work properly, and should have been an automatic step. Unfortunately, the previously released version has a bug: it accidentally ran the same old version again instead of the newly installed one.

Because systemctl fully resolves symlinks when creating symbolic links in /etc/systemd/system to enable a unit, the old version of e.g. SSH remains enabled, and the new version explicitly needs to be enabled (improvements tracked in issue #69):

Reboot into the new system to pick up all new package versions:

If you want, you can delete the old packages from your package store:

…but you can also keep them so that you can use older versions to reproduce or work around a bug.